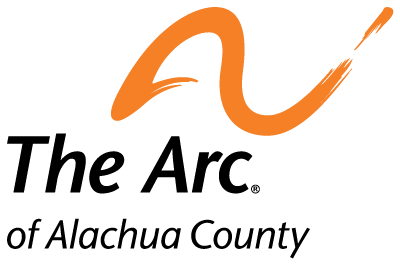 This is the reason we are here

Here Are Just A Couple Of Our Favorite Consumer Stories

Rosa has a long history of being a pioneer with the Arc of Alachua County. S he came to us in 1985 and moved into the first Arc Group Home (to date, we currently have 14 group homes). She trained in the Arc's piece rate assembly program that served 30 individuals with developmental disabilities (we now serve over 100 people in our piece rate assembly program). She became a mainstay as our agency grew.

Rosa was one of the first to work in a community-integrated training program. She worked on the Arc's mobile janitorial crew that cleaned facilities such as Gainesville Regional Utilities, the Federal Building, the Department of Transportation, and Clay Electric Company. As her job skills improved, so did her paycheck. She became a role model and valued employee. She matured and learned many things that contributed to her becoming an integral part of society. Her works skills improved to the point that she was referred to Vocational Rehabilitation for Competitive Employment. She worked at McDonalds' restaurant for 7 years.

Rosa advanced in her independent living skills and moved into her own apartment over 10 years ago. She has a roommate and is very comfortable.

Rosa eventually retired in 2005 and began attending the Arc's Elder Program. As to be expected, Rosa embraced this program with her usual zest. She is a role model to many and lends a helping hand to her friends, if needed. Rosa leads the daily Exercise Group as well as the Sewing Club. She and some of her friends in the Elder Program made a quilt. She loves to latch hook and has put her artwork on display at the Arc's Annual Art Show. Rosa always has a smile on her face and a kind word to give. She is an inspiration to many and is truly a part of the Arc family.

Chris is a person who has beaten the odds that were stacked against him in many ways. He has a developmental disability called Prader-Willi Syndrome, which often prevents individuals from leading a "normal" life due to multiple barriers that are always present.

Chris was raised in Alabama by his parents. He faced the challenge of overeating as well as obsessive – compulsive disorder and severe behavioral problems throughout his childhood.

As an adult, Chris is still dealing with these same challenges. He came to the The Arc of Alachua County in 2003 seeking assistance to control his weight, improve behaviors and anger management, gain employment, and further his residential independence.

To date, he has demonstrated strong accomplishments in all of these areas. Chris is now living in a Transitional Apartment setting; is within his target weight range (he lost over 40 + pounds); is an active member of the community; and has been successfully working on the Arc's Recycling and Clean Room (medical parts assembly) work programs. He earns a good paycheck weekly and saves his money for personal expenses as well as for dates with his girlfriend.

Chris is a true self - advocate and inspiration for his peers. Several times he has had a weight increase, recognized it on his own, and asked for assistance from staff to help him return to his target weight. He has demonstrated tremendous improvement in behavior management. He is independent in every facet of his life. He is a fantastic role model and encourages others to be more independent and to believe in their dreams.